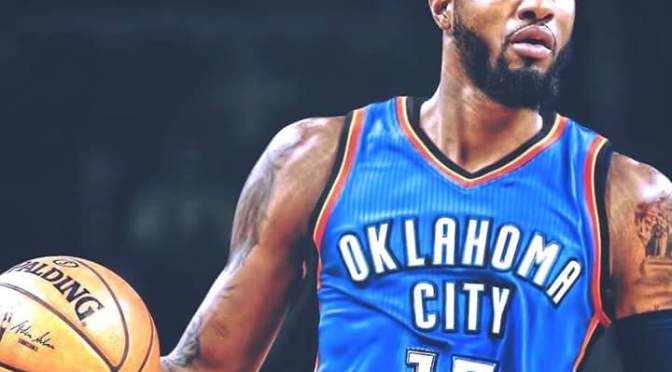 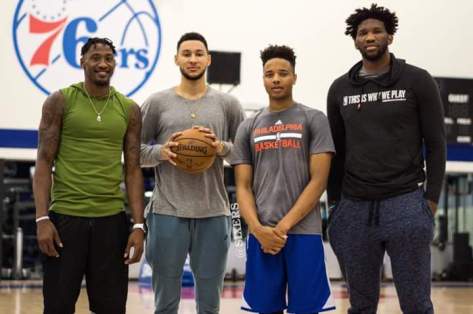 I’m not predicting a championship with team full of hypothetical rookies, but I’m very excited and on board to ride with a new true underdog! Congrats to Philly on making this trade in order to acquire the #1 pick! I expect big things and major surprises from this team going forward.

There’s still a few things that’ll need to be addressed. I’m only concerned about the defensive end of the floor. They’ll need to acquire another defender or two and they may be able to give many top teams a great challenge. I’m not going to expect injury, I’m not a pessimist at all. I’m truly so optimistic that it sickens those around me at times. I’ll carry that attitude into the season with the Philadelphia 76ers.

Of course once the off-season gets fully underway, I’ll expect them to get a couple veterans to teach this group how to be professionals and how to prepare. It doesn’t hurt that they’re very talented already individually and that even Ben Simmons has a legendary tutor. We all know who. Let’s hope Robert Covington can continue to elevate his game as well. I can’t wait to see if they move the ball the way I believe they definitely can. Coaching will become a factor as well but I expect it to be a success.

The only real question I have now is, “Does Philly keep Jahlil Okafor?” They could flip him for a couple good players that’ll help develop these young players into very good players early. They could flip it into those defenders I speak of as well.  They do have Dario Saric at the 4, so do they need Okafor? Then again, they could just use Okafor off the bench and maintain an advantage that many teams don’t have: having multiple scoring big men.

I don’t want them to land any veterans that’ll take away from the young players development. I see them developing like the Rose-Noah-Deng-Gibson Bulls, the Durant-Russell-Harden-Ibaka Thunder, and they could become the Steph-Klay-Dray of the East but with a much different twist. I hope Fultz and Simmons turn out to be as anticipated out the gate! That’ll definitely cause matchup problems galore with “The Process” having distance shooting and post presence apart of his arsenal. If Ben Simmons can be a force on the defensive end along with his court vision and passing abilities, with Embiid rim protecting, they really could shock the league.

It was all on you KD.

Congratulations to Kevin Durant and the Golden State Warriors! They are your 2016-17 NBA Champions! Redemption, revenge, and recovery all wrapped in one! Kevin Durant has endured a high level of scrutiny and came out on top. He faced a lot of friction from the media, especially from a few high-level media types right before Game 5. Debate that! If it were not for his injury, I don’t think this Warriors team would’ve had the bench ready to go to war with Cleveland. They didn’t band together until KD went down. Steph didn’t find himself until KD went down. Draymond Green didn’t tap into another level again until KD Went down. Let’s not mention the fact that even I believed Golden State would fall off defensively. They posted league highs in efficiency this year, not only on offense but defense as well. How? KD.

Coming into the year, KD was hated for going to the team that ousted him. Now that he’s got the title and he will have a ring, let me break this down for you. If KD opted to stay in OKC, he would’ve had to deal with finding out who was the #1 option with Russell Westbrook. He would’ve been without Serge Ibaka who I though enabled them to take down the Warriors and Spurs. With that said, had he stayed in OKC, he would’ve still had to see both the Warriors and Spurs in the playoffs on the way to seeing LeBron in Cleveland. What would’ve been his odds? Be honest. NO ONE THINKS KD COULD’VE BEATEN LEBRON WITH OKC! That’s a fact. Doesn’t mean it couldn’t happen.

He coasted most of the year, trying to fit in early and not be imposing. Steph, Klay Thompson, Dray, everybody took a backseat to making him feel comfortable. Steve Kerr did a good job in putting a roster together after losing so many pieces to obtain Kevin Durant. Got to tip our hats to the Golden State Warriors organization. They brought in a few journeymen in David West, Matt Barnes late, Zaza Pachulia (the Kawhi killer), and even Javale McGee. McGee had a hard time staying on any teams’ roster since he and George Karl were split apart. This is the best I’ve seen him play since then. There’s no other team that would gamble on him. It paid dividends, especially in the first 2 games of this final.

No one is talking about how Andre Iguodala stepped up in KD’s absence either. We must, MUST, give this man respect for being willing to take a bench role for the better of the team overall. No one mentioned the Warriors depth as being a threat. Come on now. Livingston, Iggy, Barnes, West, McGhee? Throw Ian Clark and Patrick McCaw in there and you’ve got something that you can develop into something special indeed.

I want to give LeBron and Kyrie their due respect for carrying their team this far. They put it all on the line. I personally think they should’ve obtained some different pieces and I can imagine that half of this roster will be completely different going into the 2017 season. Maybe Carmelo, maybe Paul George, maybe Chris Paul, Dwayne Wade, even DeMarcus Cousins could end up here. They’re all in the rumors. My sleeper here is Blake Griffin. LeBron and Kyrie were scoring at will but did tire out and their team, their bench, just couldn’t give them enough of a cushion. I think Bogut would’ve paid dividends and may have been enough for Cleveland to win this series. The Cavs aren’t as far away from being as talented as this Warriors team. Don’t forget that. Be humble with this Championship, Warriors fans. Congratulations on another great season. I’m sure we’ll see you here next year. Currently, the only threat out west is Kawhi Leonard. The basketball gods shined down on you!

Kobe Is Somewhere Hoping LeBron Gets Swept… It cements him as the 2nd Best Behind Jordan in this 3 headed debated. 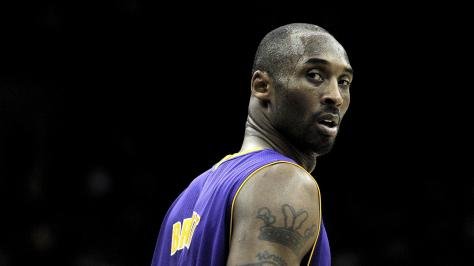 We’re currently sitting on a 3-0 Warriors lead in these playoffs. LeBron has played very well but he just doesn’t have enough done to have anything in the win column. Is it his fault now? That’s to be determined and deciphered. There is 1 thing that would be made plain and simple if the Warriors sweep the Cavaliers tomorrow night, the Jordan AND Kobe conversation ends. It’ll just disappear like smoke in the wind.

We’ve spent most of the last 2-3 seasons asking if LeBron is the GOAT. With that comes a direct comparison to Michael Jordan. To be the best, you must beat the best. It’s easy to see that LeBron has been topping Jordan in a lot of records. Blame can be put on what age they came into the league and the fact Jordan retired DURING his prime. Other fingers point to the heavy Eastern Conference Jordan had to deal with. He had so many rivals, especially in comparison to LeBron. Even LeBron tried to mimic the fact that Jordan had to go through the Detroit Pistons to become a champion. That led to him being swept out of the finals. After that happened, his only true rival had been formed in the form of the Big 3 Boston Celtics with KG, Paul Pierce, and Ray Allen. Rajon Rondo was on his was to greatness as well.

James finally had to face-off a few times with the Celtics before deciding that he’d be better off fighting this monster by joining forces with Dwayne Wade and Chris Bosh in Miami. Mind you, Kobe Bryant is still apart of the terror that resides in the Western Conference. Kobe then fought with the Celtics twice and becomes a repeat champion after 3 finals visits. Fast forward to the Mavericks team that finally beat Kobe and became the NBA Champion against LeBron James and the Miami Heat. LeBron then becomes an NBA champion a year later versus Kevin Durant and the Oklahoma City Thunder setting up a dream rematch that we wouldn’t see for 5 years. LeBron then repeats against the San Antonio Spurs, giving him revenge and solidifying him as a champion. He then falls to the Spurs and goes back home to Cleveland. There, he takes them straight to the NBA Finals and loses to the Golden State Warriors. The next season, he posts an epic 1-3 comeback versus these same Golden State Warriors. Now to bring it full circle, we are looking at LeBron down 0-3 to the Warriors again.

Now, should LeBron lose to these Warriors in a sweep, there’s one thing that would be cemented: He CANNOT be determined as the Greatest of All Time. Ever. He can’t even be placed as the second best, in my opinion, behind Michael Jordan. He will be etched behind Michael AND Kobe Bryant as the 3rd best between those 3 players. We’ve been overlooking Kobe for a long time and his legacy can be cemented with him simply sitting at home, retired. I’m sure he’s somewhere right now hoping that LeBron falls to the Warriors 4-0 in this NBA Finals matchup. It does nothing but put Kobe back into the conversation where he never truly existed AT ALL in the minds of many LeBron James fans. Rather it was because he was a facilitator that Kobe never was, rather he was “considered” the one who elevated his teammates, he was ALWAYS put over Kobe. We can debate rather Kobe made his teammates better or not, I thought he made them better players, taught them preparation, kept them all reeled in and uncomfortable with losing, and ultimately, made them step their game up to catch their last 2 championships. He didn’t have Shaq for the last 2. He had Pau Gasol who was considered SOFT and Andrew Bynum who was considered aloof and was often injured. Kobe gave his teammates toughness. Kobe was never swept out of the Finals. Kobe often played through injuries throughout most of his career and still played at an elite level most of his career before the Achilles injury. LeBron is standing on a floor of eggs shells right now and looking at the door that Michael Jordan entered. There’s two ways this can go, the likely scenario is that he will either fall through and drop a level, under Kobe, who he is eye to eye with, or he will post the greatest comeback and walk through that door. I’m sure Kobe is watching, waiting, hoping for his legacy to be cemented as 2nd best behind the mysterious ghost that is Michael Jordan.

I’ll leave you with this, could Jordan win at least 1 game against this Warriors team? Could Kobe?

In this episode, we cover Kevin Durant, LeBron James, the finals, and even the Lakers and Sixers!

Recorded ahead of game 2 of the NBA Finals.

Also, subscribe by email to the blog to receive everything first!