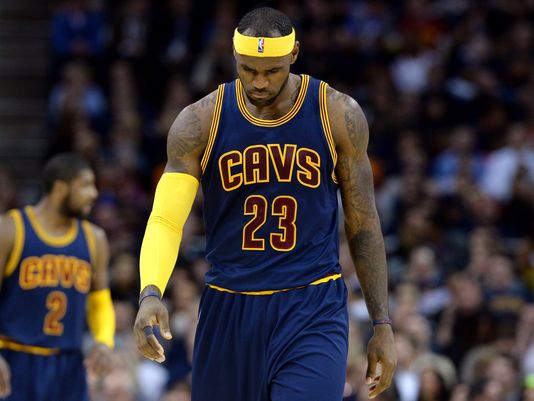 Yeah I said it. The Cleveland Cavaliers WILL NOT make it to this years NBA Finals. I don’t see it right now. Of course, I’m human, I could be wrong but I’m believing what I’m seeing right now from their team and that isn’t much. My thoughts all stem from their behavior with the media and from their leader, LeBron James. It isn’t the behaviors of a contending team. This team is doomed to fail unless they hit a hot streak over the last 15 games of the season and win their last 13 of 15 games on the way to the playoffs. Even if that happens, there is still a level of trust and chemistry that has to be built in order to be able to execute precise plans on teams in the playoffs where every game becomes a chess match.

There’s not enough time to fix this and I’ve been watching some of the Cavs games this season and I must admit that I don’t “feel” their presence when they play other teams. Last year they were very imposing when I watched them play other teams. This season, those same teams have certainly grown and aren’t scared of LeBron or playing like they believe the Cavs are the superior team. It’s not going to take much to knock Cleveland off in my honest opinion but there’s still dealing with LeBron James at the head of this monster. HE can operate WITHOUT Kevin Love & Kyrie Irving. I’ll talk about that in another post. Right now, I’ll speak in respect to what I think could get Cleveland back. Sorry Coach Lue, but here’s my plan.

The Cavs are more defensive without Kevin & Kyrie. I highly doubt they would’ve held a slower burning candle to the Warriors in the playoffs with those two on the floor. Maybe the focus of last year and momentum would’ve upheld them and forced a game 7, but we still would’ve had the same outcome. I think there are a few REAL threats and a few darkhorse threats to the Cavs in the postseason. ALL of 2-8 is a threat. The REAL threats are the Heat, Raptors and Celtics. The darkhorse threats are Chicago, Detroit, Indiana, and Charlotte. I won’t put Atlanta in this conversation cause they have yet to honestly be a true threat without having a defensive wing like Demarre Carroll there any longer, he’s a Raptor now. I’ll keep this short, if the playoffs started today, the Cavs would be bounced in round 2 by the Heat. Yeah, I said that too!

4 thoughts on “Wanna Bet? Cavs WILL NOT Make the Finals This Year…”