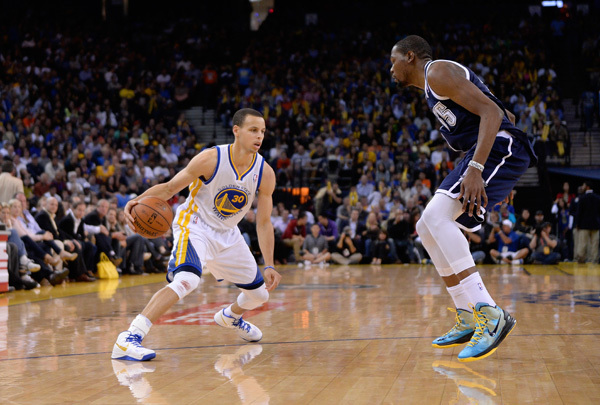 What is the more important way to score in the NBA to you? What has happened to the art of the mid-range game? The way Larry Bird, Michael Jordan, Reggie Miller, Richard Hamilton, and the Ray Allen’s of the world used to torch opponents was always a spectacle. Very rare to find it throughout the entire NBA today.

This is currently LeBron’s game depending on who you ask. The driving, the finishing, the kicking it out to the open man. Everyone considers that style of play as MVP basketball. It seems that if Kevin Durant didn’t average the assist numbers he did during his MVP season that he wouldn’t have become league MVP. I certainly don’t think so. So how did Stephen Curry win this year’s MVP award? I think the league is more LeBron, Russell Westbrook, more DeAndre Jordan and Blake Griffin than anything.

Then there’s the rare few players in the league that can light it up from anywhere on the floor. This brings us to Kevin Durant and Stephen Curry.

Who is the best shooter?

Could you honestly answer this question without truly thinking that maybe you’re wrong no matter how you answer it? It’s like there’s not enough decisiveness about who has done exactly what you think they should be doing. Stephen Curry should probably shoot more mid-range jumpers but he won the MVP and NBA Championship relying on his three pointer. Kevin Durant has won an MVP and has an NBA finals appearance but we all still think he should be more in control than Russell Westbrook.. wait, do we still believe that? Especially after the season Russell had without Kevin? Could they do it alone? I personally don’t think so. We’ve also seen Durant go for it on his own and he’s basically MVP by himself. So do we judge the winner by their body of work?

We knows who’s won and he’s done so being the focal point of his team’s success in efficiency and judged by win shares. Of course I’m talking about Chef Curry. The guy spent one-quarter of most of the games sitting because he put teams away in short order. He’s been the one who Steve Kerr gave the keys to and told him that the offense is running through him. After being much developed by Mark Jackson, I’ll give him his due, yeah, but Steve Kerr opened up the flood gates for Steph to just come in and shoot, shoot, shoot without a leash.

They said live by the three, die by the three but no one has ever truly lived from it until now. So do we acknowledge that he single-handedly changed the way the game could be played? Not only from an individual perspective but also a team perspective for those who are looking to team build and focus on small ball, Stephen Curry is the carrying the torch into a new era. Before he can truly run freely, he’s already been tasked with validating his championship. Which means his torch is lit but he can’t run just yet, it may go out.

Kevin Durant on the other hand is the silent assassin. The Slim Reaper, Easy Money Sniper. Tall enough to be considered a power forward but skilled enough to honestly play the shooting guard position. The guy who you’d expect to make the game winners that everyone else misses. The man should have a championship title under his belt if it wasn’t for injuries to each of the Thunder’s big 3 over the last 2-3 seasons plus the loss of James Harden. The man can shoot over anyone but seemingly only has a problem when Chris Paul guards him. Keep that dribble closer! I’ve seen Kevin Durant do some things I didn’t think were in him during his MVP season. It seemingly made it over the hump into superstar territory with the way he closed out teams. He had the best scoring tear since Kobe had his launch of great games strung together that led up to 81 and thereafter. He’s been the one man who everyone wants to see get a chance to run his own team and be the focal point, or at least convince Russell to defer to more often cause he can take you promised land easier than Russell can. He can shoot from anywhere on the floor just like Steph Curry and can also drive to the hole and make plays for his teammates. So much talent and basically gives his team the same package that Stephen Curry does.

So you still have only one answer and it has to be one or the other. Which answer do you give? What do you consider? If you take away all the accolades, who is the winner?

One thought on “Respect The Shooter”